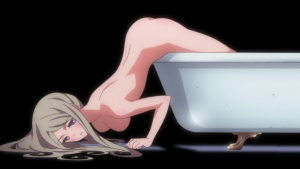 An unspecified female is being bathed in honey that is poured onto her by Mitsuko Yurizono and Yuriika Hakonaka. After a sequence of Ginko Yurishiro and Lulu Yurigasaki biting Kureha Tsubaki, she is seen waking up naked in a Clawfoot Bathtub leaning so far off the edge that her face is against the ground and her buttocks is pointed straight up.

This bath scene did not occur in the manga adaptation most likely since its just an opening sequence animation.

This opening first appeared on January 5th, 2015 in front of the first episode and has opened all of the episodes.