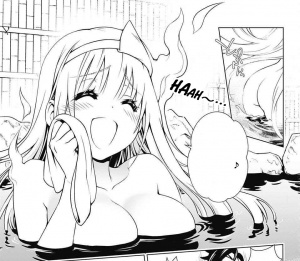 The chapter begins with Yuuna Yunohana floating over the Onsen of Yuragi-sou. There is a flashback of Yuuna Yunohana's hand when she died during a Bath in Yuragi-sou's Hot Spring. Kogarashi Fuyuzora takes a bath in the onsen mentioning that he hasn't had a hot bath in a month and had to Skinny Dip in River's and take Waterfall Showers Off Screen. While bathing in the onsen, the ghost of Yuuna joins him but then freaks when Kogarashi notices her and starts throwing Bath Buckets at him knocking him out. Later on in a nightmare sequence Yuuna is in hell being boiled in a Kamaburo bath. At the end of the chapter, Sagiri Ameno, Yaya Fushiguro and Nonko Arahabaki are in the onsen's Changing Room getting ready to bathe. When Chitose Nakai, Nonko, Sagiri and Yaya go into in the onsen to attept to bathe, Kogarashi falls into the hot spring clothed seeing them naked and get mad. Yuuna tries to stop them saying that it's her fault for throwing him but when they hear it's because he accidentally grabbed her chest they beat him up.

This chapter was adapted into the first episode of the anime series.