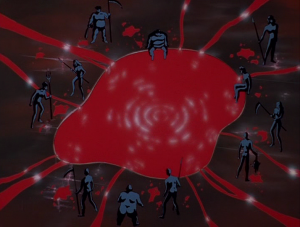 There is a Flashback Bathing Scene with many Unnamed Bathers taking a Blood Bath.

The same scene is shown through Recap Footage but colored differently and adds an extra shot of one of the demons about to be cut up.

This episode is an adaptation to the 127th chapter of the Yu Yu Hakusho manga series. The manga version shows more full nudity on the men bathing in the blood and aren't shadows like in the anime.