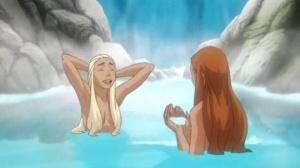 Wonder Woman is an animated film in the DC Comics franchise that has a bathing scene in it.

Alexa is shown Skinny Dipping with two other woman and unaware they were being peeped at by Steve Trevor.

This film was released direct to DVD in North America on March 3rd, 2009.