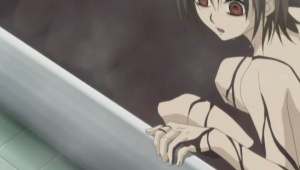 Yuki Cross takes a Bath in a Clawfoot Bathtub and has a Dream Sequence Bathing of a Blood Bath.

This episode was based off of the 27th chapter of the Vampire Knight manga. Im the manga version, Yuki's bathtub is a Clawfoot Slipper Bathtub rather than just a regular clawfoot tub.