This is a list of appearances by unnamed characters in the Agent Aika series who have had some form of bathing scene. 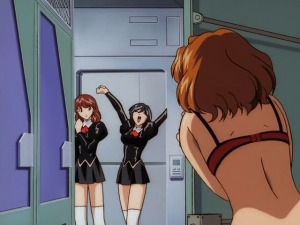 Two unnamed Black Delmo's, both with shoulder length hair with one being brown and the other black, are seen entering the locker room after their shift saying they are now going to have Showers. Both are shown having a conversation as they are Stripping. There shower gets stalled as they are interrupted with an announcement of Aika's fight and with Rion trying to blend in with them but the two girls end up having the showers Off Screen.

One of the Black Delmo's that start attacking Aika Sumeragi in the changing room after her Off Screen Bath with Rie Petoriyacowa gets thrown into bathroom where she lands in the Bathing Pool clothed. As she tries to get out, Aika who is fighting two other Delmos steps onto her head pushing her back into the bathwater as she takes the other two out. This Delmo had shoulder length brown hair and a pink head band in her hair.

Eight students of the girls academy are seen having Showers together in the Shower Room. During the shower most of the girls are just washing themselves with one of the girls getting her breasts grabbed playfully by another one of the girls. As many gratious views of nudity are shown as the girls are showering, they began to get proped in the rear end knocking each girl out, one by a laser-like thread created E.T.A.I. After all the girls are knocked out, Aika Sumeragi looks into the changing where she witnesses and attempts to stop the thread as it is carrying each of the naked girls into a hole that was in one of the lockers leading to the White Knights underground hideout.