Ultear Milkovich (sometimes translated as Urtear) is a character from Fairy Tail.

During the aftermath of the Tower or Heaven arc and Jellal Fernandes defeat, Ultear is seen taking a Bubble Bath and talking to her guilds master, Hades using a Communication Lacrima Crystal. During their conversation talking about Jellal being used and Zeref's whereabouts, Ultear is seen Crossing her legs. Afterwards, Ultear is seen out of the bathtub and getting ready to cover herself with a Towel as her back is exposed showing the marking of her guild, Grimoire Heart. 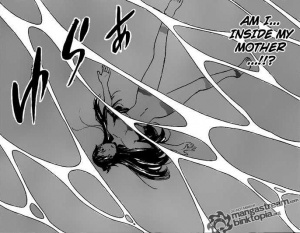 Ultear skinny dipping in the ocean as part of a vision

She has a Skinny Dipping scene in a vision she has during one panel after falling into the ocean during her fight with Gray Fullbuster. In the vision, she is naked in the ocean water where she realizes her mother Ur's soul is in the water and finds that she is joined together with it.