Towel Bathing is when someone bathes while they have a towel on. This is mostly done in Hot Springs. 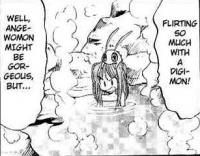 Ami bathing in a fake hot spring wearing a towel

In the eleventh chapter of Digimon Next, Ami Kitajima bathes in a Hot Spring wearing a towel. When she finds out that it was an illusion and that its really oil she is still wearing the towel. Template:-

Asuka, Rei and Misato in towels while in bathtubs

The Evangelion soap trays feature each of the girls bathing in Clawfoot Bathtubs while in towels. Asuka Langley Soryu is in a red towel.