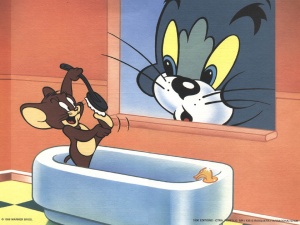 Jerry Mouse runs into a doll house and takes a Bath in it's Pedestal Bathtub while Singing and using a Scrub Brush. When Tom opens the curtain and peeps at Jerry, he hits him with the scrub brush runs away.