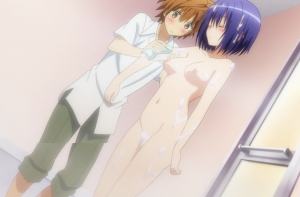 Haruna Sairenji and Rito Yuuki end up switching bodies Rito accidentally gets dirty. Rito who is still in Haruna's body has to get bathed by Haruna in Rito's body while he tries to keep his eyes shut.