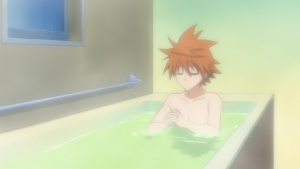 To Love-Ru episode 4 is the fourth bathing scene in the To Love-Ru anime series.

At night, Rito Yuuki takes a Bath in Green Bathwater in the Unit Bathtub in his house's Ofuro. The scene starts with him stretching his arms and then submerging into the bathwater up to his face where he then starts Blowing Bubbles and then splahes water onto his face.