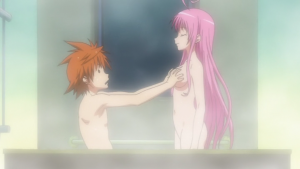 To Love-Ru episode 1 is the first bathing scene in the To Love-Ru anime series.

At night, Rito Yuuki is taking a Bath at home in a Unit Bathtub filled with Green Bathwater. While in his bath the female alien Lala Satalin Deviluke is transported naked into his bathtub where he is shocked and mesmerized by her naked body. While first seeing Lala naked he accidently lands his hands on Lala's breast while Lala seems to not care. Being freaked out over this surprise, Rito runs out of the bath in a Towel and tells his sister Mikan Yuuki that there is a naked woman in their bathtub, but Lala is gone when he shows her making Mikan embarrassed by thinking her brother fantasizes of woman in while in the bath. When Rito goes back to his room he see's Lala on his bed wearing a tan towel.

This episode was an adaptation to the first chapter of the To Love-Ru manga. Rito bathes with a Rubber Duck and bathes in blue bathwater instead. Alongside the obvious difference that the bathroom is modeled slightly different the bathwater in the manga version is not transparent so you can see that he is spreading his legs and appears to Leg Arching instead. When Rito fantasizes about Haruna in the manga he just submerges into the bathwater with a wash cloth on his head rather than the cartoony effect the anime did where his head gets big and he overheats. The shot where Rito is arm resting is zoomed in more in the manga and before the explosion Lala teleports in from, a flash happens before the water explodes. The part where Rito ends up grabbing a hold of Lala's breasts is exclusive to the anime. The Towels are different colors where Rito's towel is blue and Lala's towel is tan. The scene where Lala is sitting on Rito's bed has Lala's nipple hanging out of the Towel in the manga.