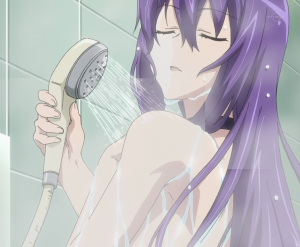 Haqua du Lot Herminium is seen taking a Shower in the Katsuragi Residence Bathroom for a Furo session. As she is about to get into the Bathtub, Keima Katsuragi comes in to bathe and while not noticing her for a second she screams and attacks him.