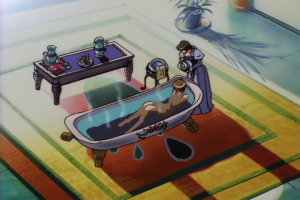 Hitomi Kanzaki is given a Bath in a Clawfoot Bathtub by Servants before she comes out in a new dress. She was bathed because the clothes she had been wearing smelled of sweat and animals.

The scene was cut from the originally TV airing on April 23rd, 1996 because of time constraints along with many other scenes from the first 6 episodes. Sometime after, an extended video release of the first six episodes came out which contained this scene.