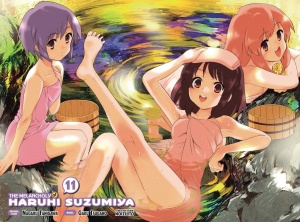 This illustration was released as an exclusive title page to the 11th manga volume.

This illustration is possibly based off of the bathing scene from the third storyline (titled "Snowy Mountain Syndrome") in the fifth light novel volume which was titled The Rampage of Haruhi Suzumiya. The novel does not visually show any of the bathing and is through text only.

This scene was not adapted into the anime series and is exclusive to the manga.