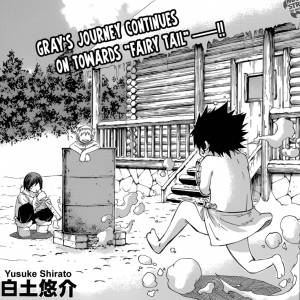 On the cover, Lyon Vastia is seen taking a Bath in an Oil Drum outside in the snow that is being heated up by Ur while Gray Fullbuster who is wearing a White Towel is seen freezing running over to it.

This chapter was released in Japan on October 17th, 2014.

The Fairy Tail anime series does not cover any of the events of the Tale of Fairy Tail: Ice Trail spin-off so this scene did not get animated and is exclusive to the manga.