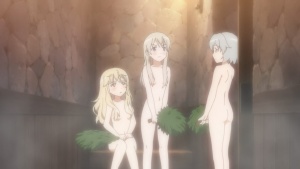 Strike Witches 2 episode 6 is the tenth bathing scene in the Strike Witches anime series and specifically the third in it's second season.

There is a Steam Bath scene and later Skinny Dipping.