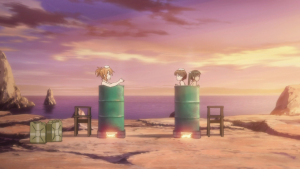 Strike Witches 2 episode 4 is the ninth bathing scene in the Strike Witches anime series and specifically the second in it's second season.

There is a Bath scene with Neighboring Oil Drums.

Francesca Lucchini's nipples are covered by lighting on the TV airing but became uncensored in the DVD and Blu-ray release.