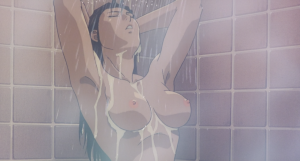 The frontal shots showing Chun-Li's nipples were cut from the early North American releases of the movie as well as in the version that is watchable in the Street Fighter Anniversary Collection game on Playstation 2 that was released on August 31st, 2004 along with it's later Xbox port. A later uncut DVD re-release of the movie in North America brought the shower scene over completely uncut.

This movie first released in Japan on August 6th, 1994.