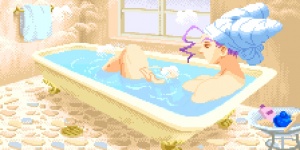 Rose is shown taking a Bath in a Clawfoot Bathtub while wearing a Towel on her head during her ending cutscene.

This scene was removed from the Super Nintendo port. It is unlikely it was removed for censorship reasons and more for hardware limitations since the port was already severely stripped down performance-wise in comparisons to it's counterparts on other platforms as well as the scene having the least plot importance to the other parts in Rose's ending. 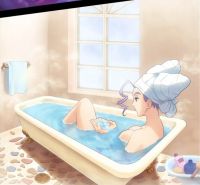 Remake of this scene in the Street Fighter V arcade mode for Alpha.

Street Fighter V Alpha arcade mode redraws all of Rose's alpha 2 ending in the style of a comic with this bath scene being included in it and every detail kept intact in a much cleaner image with the except of the design of the table behind the tub holding the accessories. It is revealed that one of the accessories is actually a Sponge since in the original pixelated version of the ending, it was unclear if it was a sponge or a Soap Bar.

This game was first released in Japan as an Arcade game on February 27th, 1996.