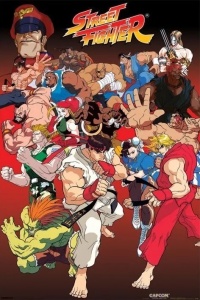 Street Fighter is a series of fighting video games developed by Capcom which has spawned numerous adaptions in many other forms of media including anime and manga.

Ryu Hoshi and Ken Masters go Skinny Dipping together in the hotel pool.

Chun-Li Zang is shown in a hotel room exiting the bathroom wearing a pink Bathrobe implying that she had an Off Screen Bath or shower.

Rose is shown taking a Bath in a Clawfoot Bathtub while wearing a Towel on her head during her ending cutscene. This scene was removed from the Super Nintendo port.

In the Bath House stage, Sakura Kasugano and Kei Chitose are seen in the background taking a Bath on the girls side while wearing yellow Towels.

Sakura Kasugano and Fuka have a Furo scene together.

Chun-Li Zang is given a Bath by Gen while having her wounds healed.

Asura awakens after a hard fight to find himself in a Hot Spring with his former mentor, Augus. They bathe together before leaving to do battle themselves.