On their way to Castle Cinder, Tsubaki Nakatsukasa goes Skinny Dipping in a nearby Lake and Black Star goes to Peep on her. He hids behind a bunch of rocks and talks to himself saying his laws of the peeper which number 1 are to mask your emotions and sneak cautiously. After lifting his head over the rocks to look, he sees her Standing In The Bath with her back turned and yells "Woah!! Nice!!" and then tells the second rule of peeping which is too "settle in quietly and and get ready for some serious viewing". Tsubaki who can clearly hear him yelling to himself turns around and takes a shuriken out and covers her breasts with her other hand. She throws the shuriken at his forehead making him fall down and bleed and then tells him that he should atleast try to mask his presence if he is going to peep. Tsubaki is then seen wearing a Towel with a star on it and happily giving a thumbs up after Black Star gives one while laying on the floor and says that he is now dying and his presence is zero.

At the end of the chapter, Black Star peeps on Tsubaki again while she is having a Furo session at the Shibusen Public Bath where he still yells the laws of the peeper again making all the unnamed female bathers attempt to cover themselves yell at him. Tsubaki who is cover her breasts in the corner and holding a towel throws another shuriken at him and says that he never learns.

Higher water level in the anime

Both of these bath scenes were adapted in the 2nd episode of the anime. The Lake that Tsubaki bathes in has a way higher water level in the anime which is enough to cover her buttocks while standing unlike in the manga where it was very shallow and only went up to her knees. Black Star peeps on her from a high ledge rather than simply being behind some rocks right next to her. Tsubaki is also holding a towel during the scene and when she takes her shuriken out she is seen to cover herself with the towel rather than covering her breasts with just her hand. 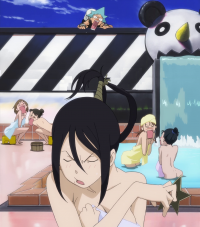 The Public Bath in the second scene has a completely different design which doesn't have the excess amounts of injured panda statues and instead has a single Bathing Pool with a waterfall coming out of the mouth of a panda face rather than the multiple Hot Springs. Tsubaki during the public bath scene isn't covering her breasts with her arm and is just towel holding the entire time without having the small star towel laying on her legs or her crotch area being visible. The unnamed females at the public bath also have completely different designs with most notable the dark skinned girl not being there and their being 4 girls of them instead of 3. All of the girls are mostly covered up by towels in some way rather than being completely naked with having two of the girls sitting on Bath Stools and the other two standing up Towel Bathing in the bathing pool.

This chapter was first released as a one-shot in a 2003 autumn issue of Gangan Powered. On June 22nd, 2004 the chapter was printed and published by Square Enix in the first manga volume released in Japan. The scene was officially translated and released in North America in volume 1 published by Yen Press on October 27th, 2009.