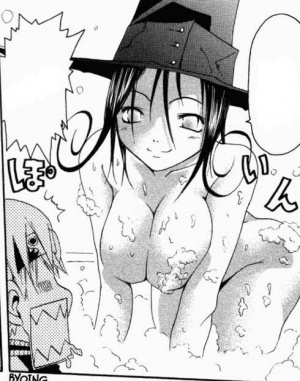 Blair is introduced taking a Bubble Bath in her house's Clawfoot Bathtub and Singing with us first seeing her stretching her leg and having it washed by her magic Scrub Brush. She then sits up with her breasts out and covered with soap suds asking her brush to scrub her back next. She leans against the edge of the Bathtub as her back is being washed while continuing to sing. Outside of Blair's house, Soul Eater Evans who is trying to find the soul of a witch to eat, jumps through the window intending to take Blair head on but then after crashing through the window see's that she is naked in the bathtub and loses focus and accidentally falls into the tub with her. When Soul gets his head out of the water, he see's Blair bent over in his face telling him he's cute. Soul gets a nose bleed and then tells her that he's a cool guy and is used to seeing naked woman all the time, but Blair seems to doubt it because of his nose bleed. Maka Albarn comes in through the window and angrily kicks Soul out of the tub and afterwards Blair is now outside of the tub still naked and holding Soul under her breasts and to comfort him and see if he is alright. Maka tells Blair that she and Soul are after her soul and then Blair quickly gets clothed and ready to fight.

"Sorry to disturb your bath, but we're here to take your soul!!"
~Maka Albarn
"Seriously, men are such scumbags!! I'll bet you rushed in there because you knew that witch was in the bath, didn't you?"
~Maka Albarn

This chapter was first released as a one-shot in July 24th, 2003 in Monthly Shonen Gangan. On June 22nd, 2004 the chapter was printed and published by Square Enix in the first manga volume released in Japan. The scene was officially translated and released in North America in volume 1 published by Yen Press on October 27th, 2009.

This bath scene was adapted in the 1st episode of the anime. The changes made in the anime version are that at the beginning of the scene, Blair is Leg Folding while its being washed rather than it being fully stretched out like in the manga. There is also a Rubber Duck in the bathtub with her rather than being outside of it. When Blair is getting her back washed, the scrub brush is flying around in circles as she wiggles her butt back and forth rather than a having a basic back scrub like in the manga. When Soul jumps through the window, he lands face first directly into Blair's breasts. Blair's breasts stay in the bathwater at all times and the shot of her bending over doesn't happen as Soul gets a nose bleed from landing in her breasts instead. When Soul gets knocked out of the tub by Maka, Blair remains in the tub and leans over the edge with her Butt Floating above the bathwater and the rubber duck sitting on top of it while she talking to Maka. Blair gets dressed by Getting Out of the tub and magically being fully dressed once she jumps out. The Bathtub's design is also a bit different from its manga counterpart with it being colored tan and having a roll around rim. There also extra shots that aren't seen in the manga which show the full tub and reveal that it has claw feet.