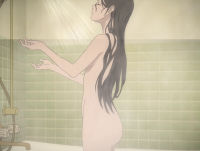 A Shower is a method of bathing that involves a person to stand naked over a running water source that sprays water onto their body. Showers are typically taken by using a device known as a Shower Head which will spray many small streams of water onto the bather at high pressure and is usually done so over a floor that has a drain on it so the water doesn't flood the area. Unlike Baths which are used for both cleansing and relaxing, showers sole purpose is for cleansing and is usually considered to be a lot quicker and more clean that a bath. Showers have become the most standard method of bathing by the late 20th century in western culture. Most bathrooms in the west have a Shower Tub Combo which places a shower head over a Bathtub where the user stands in an empty Bathtub that is closed off by a Shower Curtain to take a shower. In Japanese culture, the shower is usually separated from the tub and it is utilized as part of a bath during a Furo session where they would shower first before getting into the bathtub to keep the bathwater water clean. Showers can still be taken out in the wild such as through a Rain Shower or a Waterfall Shower while Skinny Dipping.

This category has the following 96 subcategories, out of 96 total.