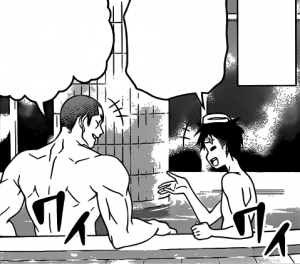 There is an earlier scene of Erina Nakiri leaving the Totsuki Resort's Public Bath in a Spa Robe humming just before she crashed into Soma Yukihira last chapter. Soma goes into the public baths and sees that Gin Doujima is the only one in their and exercising while Rim Sitting on the Bathing Pool. They both sit in the Bath together and talk about how he was the first to arrive to the bath after finishing the challenge of serving 50 guests just like how Satoshi Isshiki did last year through a Flashback Bathing Scene and that Erina was the one who really finished first since she already left the baths before Soma came into them. Takumi Aldini shows up second and Gin gets out and shakes Soma's hand.

In Zenji Marui's hotel room, we see the Clawfoot Bathtub in the bathroom is already full and shows some signs of splashes around the rim possibly hinting that he took an off screen bath in it instead of using the public bath. Yuuki Yoshino, Daigo Aoki, Soma and Shouji Satou, Shun Ibusaki, Ryouko Sakaki and Megumi Tadokoro invade his room all wearing spa robes after everyone had some off screen bathing.

This chapter was first released on April 22nd, 2013 in Weekly Shonen Jump. On August 2nd, 2013 the chapter was printed and published by Shueisha in the third manga volume released in Japan. The scene was officially translated and released in North America in volume 3 published by Viz Media on December 2nd, 2014.

This bath scene was adapted in the 10th episode of the anime.