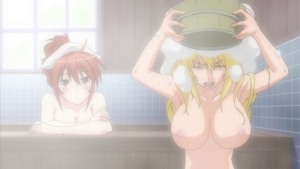 Sekirei episode 9 is the seventh bathing scene in the Sekirei anime series.

There is a Furo scene with Matsu, Tsukiumi and Kusano. Later on, there is a Tube Bath scene and then Karasuba takes a Bath in a Bathing Pool.