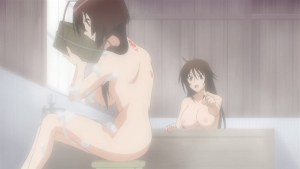 Sekirei episode 2 is the first bathing scene in the Sekirei anime series.

Musubi takes a Shower at the apartment that both her and Minato Sahashi was moving out of. After coming out she is standing in the middle of the room naked and dripping wet with no Towel and accidentally trips on knocks him over falling on him. Musubi then attempts to be modest which Minato told her to start doing by cover her breasts.

Later on, after now moving into the Izumo Inn, Musubi takes a Bath in the house's Hinoki Bathtub. While in the tub, Uzume comes in with a Bath Bucket to join her. At some point Off Screen as the scene changes briefly, Uzume gets into the tub while Musubi gets out to wash herself. Back to the scene we see Musubi outside of the tub during a Furo session where she is soapy and washing her arm as well as her feet while conversing with Uzume. After Musubi dunks water from a bucket to rinse the soap off, Uzume notices the mark behind Musubi's neck pointing out that she is a Sekirei which Uzume then moves her hair back to reveal that she is one as well. The next thing that happens is that Musubi then starts trying to attack Uzume in the bath because they are both Sekirei and have to fight but Uzume dodges all of her attacks. Uzume then flees the bath and grabs a Towel which then causes Musubi to chase after her but then notices a towel and reminds herself to try and be modest as she puts it on. Uzume jumps out of the window and lands on the fence right in front of Minato which then causes her towel to drop a little bit but then fixes it. Uzume then comes up and hugs Minato which Musubi sees and gets angry even more and attempts to attack her but their landlord Miya Asama interrupts and tells both of them to stop fighting and to not be running around with only towels on.

The original TV airing on Tokyo MX had Steam that covered up Musubi and Uzume's bodies during this scene not showing any nipples or significant views of their buttocks.

In Sekirei: Pure Engagement/Episode 11, Musubi has a flashback of this scene during the moment when she fought Uzume in the Bath.