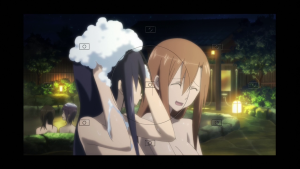 There is an Onsen scene and then later on Aria Shichijou takes a Bath in a golden Shigaraki Bathtub.