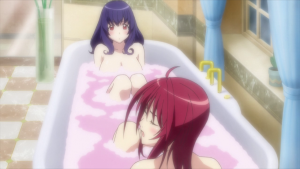 Tomo Yamanobe and Mafuyu Oribe share a Bubble Bath in a Clawfoot Bathtub.

During this episode's initial TV airing, a large amount of steam covered up almost the entirety of Tomo and Mafuyu's body along with the bathtub to the point where you couldn't even tell they were taking a Bubble Bath.