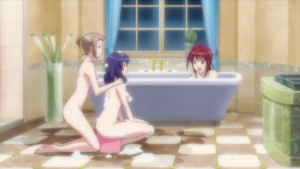 There is a Furo scene that involves a Clawfoot Bathtub.

The TV airing obscured any nipples that were visible in this scene and the scene was later released uncensored on the DVD and Blu-Ray releases.

This episode is an adaptation of the third chapter of the Seikon no Qwaser manga series. The bathtub was changed from a Unit Bathtub into a Clawfoot Bathtub in the anime. The anime also cut any instance where Tomo Yamanobe was being sprayed with a Shower Head.