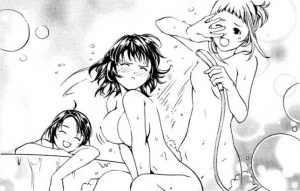 This chapter was first released in Japan on September 19th, 2006 in the magazine Champion Red. It was compiled into the first manga volume.

This chapter was adapted into the second episode of the Seikon no Qwaser anime series. The bathtub was changed from a Unit Bathtub into a Clawfoot Bathtub.