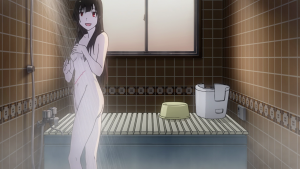 Sankarea episode 4 is the second bathing scene in the Sankarea anime series.

Dan'ichirou Sanka takes a Bath in a Clawfoot Bathtub and is depressed of the recent supposed death of his daughter Rea Sanka. Later on in the episode Rea takes a Shower and is walked in on by Jogorou Furuya who he mistakes for his deceased wife Sada and starts to try Hugging her but he gets knocked into the Unit Bathtub breaking it's Bathtub Cover.

The TV airing of this episode added a lot of steam during Rea's shower scene making her buttocks barely visible. The shot of her stripping before getting into the ofuro has a stack of green towels added in front of the camera to also cover the view of her butt.

This episode adapts the bathing scenes of two separate chapters of the Sankarea manga which are chapter 4 and chapter 5 but the anime adapted the two scenes in the wrong order. Dan'ichirou's Clawfoot Bathtub scene which we see first in the anime was actually from chapter 5 while Rea's Shower scene that happens later in the episode is from chapter 4. In the manga, Dan'ichirou's clawfoot tub is a Slipper Bathtub while it is just a normal clawfoot in the anime. In the manga, his bathroom is an Ofuro with a Bath Stool in it which we don't see in the anime.