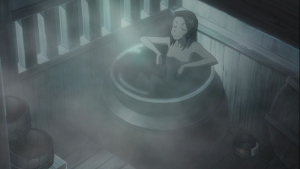 Fuu Kasumi takes a Bath in a Kamaburo while staying at an Inn.