In the beginning of the special, Ami Mizuno tells about her average morning. One part shows that she always takes a bath before school while wearing her glasses and reading a book. It first shows a bunch of flying bubbles obscuring the view of Ami in the bathtub but then becomes clear showing her Leg Stretching while reading. She then looks at the camera and closes the book. She then grabs a pink towel leaning over the edge of the tub and stands up holding it as she gets ready to get out.

The short was shown in theaters on December 23rd, 1995 as an intro for Sailor Moon SuperS: The Movie. 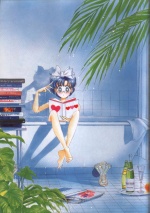 The manga cover this scene was based on.

This bathing scene was based off the cover page of the Ami's First Love omake chapter in the the Sailor Moon manga. The differences are that in the original manga, she was bathing in a Clawfoot Bathtub instead of a Unit Bathtub. She is also Middle Sitting and Leg Dangling in the tub in the manga version.