Sabo is a character from One Piece. 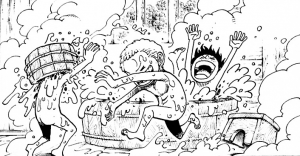 Ace, Sabo and Luffy having a furo during a flashback

Sabo is seen in a Furo session with Monkey D. Luffy and Portgas D. Ace During a brief montage in the Flashback of Luffy and Ace's childhood lives. He is seen laughing as he had a bucket put on Luffy's head.

He is given an Off Screen Bath after he is brought back to his home. He was given the bath to disinfect him because he was living and associating himself with the commoners of the island that his father hated.