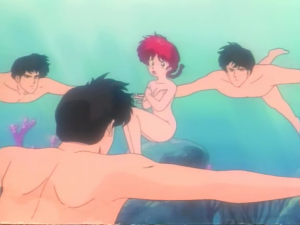 Ranma ½ episode 4 is the third bathing scene in the Ranma ½ anime series.

Ranma Saotome has a Nightmare where he falls into the Tendo Dojo's Undermount Bathtub clothed and then appears naked where Tatewaki Kuno is in the tub with him and trying to romance him. Ranma submerges himself and kicks Kuno but then re emerges from the water in his female form Skinny Dipping in the school Swimming Pool. She sinks back under and sits on a rock at the bottom where several naked Kuno's join hands and circle Ranma asking her to date him.

After waking him from the nightmare, Ranma goes to bathe that morning but then finds that Genma is occupying the Ofuro and Shampooing his bald head. Ranma splashes a bucket of cold water on his turning him into a Panda and gets annoyed and decides to just climb over him and grab the Shower Head and gets hit by Genma and splashed with cold water turning into a girl and they both end up fighting each other.