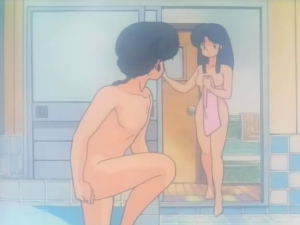 Ranma ½ episode 1 is the first bathing scene in the Ranma ½ anime series.

Sometime after first arriving at the Tendo Dojo, Genma Saotome who is in his panda form goes to take a Bath in the Dojo's Undermount Bathtub and wears a Wash Cloth on his head so he can return to his human friend so he can formally talk with his long time friend Soun Tendo.

Later on, Ranma Saotome has a Furo session in his female form after Kasumi Tendo told her to bathe from being sweaty from sparring with Akane Tendo. She sits on a Bath Stool and pours cold water over her with a Bath Bucket and then soaks into the hot water in the undermount bathtub. Akane Tendo comes into the Ofuro's Changing Room and starts Stripping and thinks nothing over the fact that Ranma is in there thinking she is a girl. As Ranma is Getting Out of the tub now in his male form, Akane walks in naked holding a pink towel and both of them meet eyes seeing each other fully nude. Akane quietly puts on the top of her karate gi and leaves the bathroom and then lets out of huge scream making a scene among the household revealing Ranma's secret to everyone there.

At the end of the episode, Akane has a furo session after being mad at Ranma and is sitting on a bath stool washing her arms and leg with a Soapy Sponge. Ranma who is in female form decides to go bathe for the night to return to normal and after completely stripping and going to the Ofuro's door, Akane opens the door to leave the bath where they both have another fully nude encounter which Akane gives Ranma a big slap in the face thinking that he is Peeping. 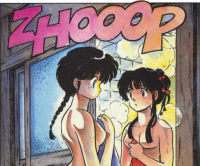 This scene was adapted in the first chapter of the manga and the last bathing scene at the end was from the second chapter.