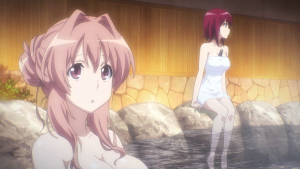 There is an Onsen scene.

This episode had the rare case of the original TV airing be less censored than the Blu-Ray release. The Blu-Ray release added more steam covering the areas where the girls Bath Cleavage are making the bath water less transparent.