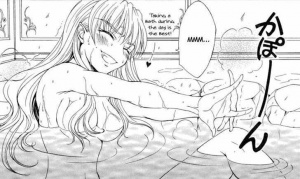 Elina Vance wakes up sweaty and takes a Morning Bath in an indoor Hot Spring.