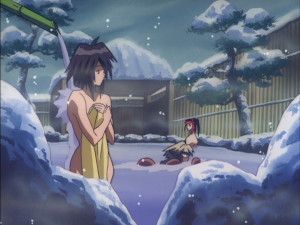 The crew of the Outlaw Star goes to an Onsen resort planet known as Tenrei. There they bathe in a train that fills with Hot Spring water while they are in Swimsuits. Afterwards they go to a water park Onsen where James Hawking goes down a Water Slide. Later on they go into the snowy mountains where they bathe naked in a real traditional onsen which satisfies Suzuka saying that this is the only Bath on that they have been to that truly captures the spirit of an onsen. Aisha Clanclan is very unsatisfied with the water and thinks its too cold for her and goes off to find a hotter bath. Gene Starwind who is trying to find the sage on top of the mountain that has a special caster for his gun keeps falling for the traps that end up throwing him clothed into the other baths along the mountain such as a bird woman's bath, Suzuka and Melfina's bath and Aisha's lava bath. Once he gets to the top of the mountain he falls into the sage Urt's hidden Rotenburo where he falls unconscious and wakes up in the bath with her. After receiving a new caster, the crew gathers back up and leaves the planet where Urt watches their ship leave while she is in a bath.

This episode didn't air during the series initial TV run first and was first released on April 25th, 1999 on the twelfth volume of the VHS.