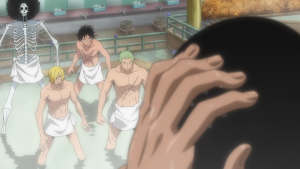 One Piece Film Z is an anime film in the One Piece franchise that has a bathing scene.

Volcanic Ash gets in Tony Tony Chopper's fur and Nico Robin tells him that they will take a Bath together later which chopper says that it isn't his bathing day but he will go anyway because the ash is disgusting. Brook asks if he can join as well and says that his face is disgusting as well but Robin says no while Chopper says that he doesn't mind.

Later on there is a Public Bath scene which so far only showed Roronoa Zoro, Sanji Vinsmoke, Monkey D. Luffy, Brook and Kuzan in it.

One of the trailers for the film shows part of the bath house scene.

This scene as well as the entire film was not in the original manga storyline and is exclusive to this anime film.