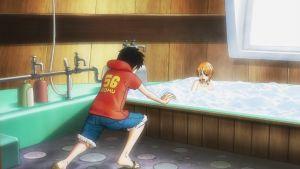 One Piece 3D: Straw Hat Chase is a 3D anime film in the One Piece series that has a bathing scene.

Monkey D. Luffy barges in on Nami who is having a Bubble Bath in the Thousand Sunny's Ofuro. Nami covers her breasts as Luffy goes up to the bathwater and splashes through it trying to search for his Straw Hat that went missing. Nami gets mad and Bath Kicks Luffy who then suddenly runs off to search somewhere else on the ship.

Everything in this entire film is original to the anime and not present at all in the manga.

The film was first released in Japanese theaters on March 19th, 2011.