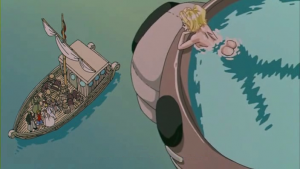 One Piece: Clockwork Island Adventure is a film in the One Piece franchise that has a bathing scene.

Honey Queen has a Bath scene.

This Film was first released in Japan on March 3rd, 2001.

The events of this film are exclusive to this anime film and don't appear in the One Piece manga series.