This is a list of non-bathing scenes in the One Piece franchise such as unused bathing facilities and Off Screen Bathing implications.

Nami takes an Off Screen Shower at some point as she has Usopp uses the water drawing machine to draw some water into the ship.

This scene is exclusive to the anime and does not occur in the One Piece manga series. 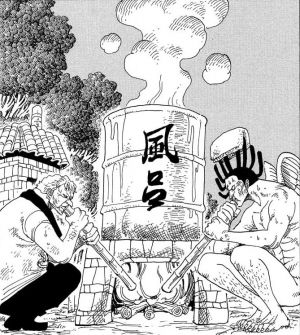 Gedatsu takes an Off Screen Bath in an Oil Drum. On the chapter cover he is seen naked heating the bath up getting ready to get in.

This scene is exclusive to the manga chapter cover and was not adapted in the One Piece anime series. 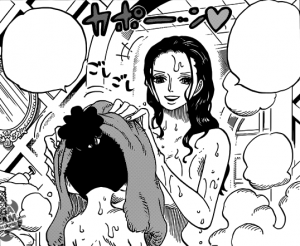 Nico Robin takes an Off Screen Bath with Momonosuke on the Thousand Sunny and emerges from the bathroom with a Towel on. 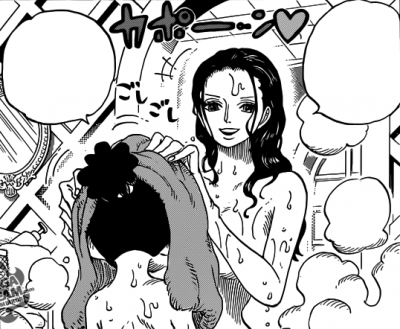 This chapter was first released in Japan on February 25th, 2013. 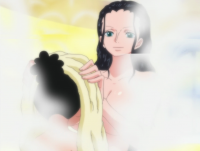 This chapter was adapted into the 625th episode of the One Piece anime series. The anime version technically counts as an on screen bathing scene since they were actually in the Ofuro during the scene, where in the manga they were already in the Changing Room. In the anime, there is lots of steam and the camera is more zoomed in, not showing Nico Robin's hips.