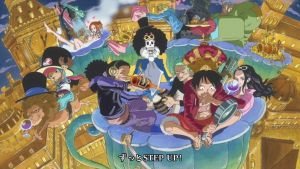 One Piece opening credits 16 is the 18th bathing scene in the One Piece anime series.

Nami is seen taking a Bubble Bath in a tea Cup.

While technically not censorship, this opening was not used in the FUNimation simulcast and international dubs of the anime due to copyright issues with the music label and had to continue using the previous opening theme "We Go" instead. Crunchyroll added the Punk Hazard episodes that were previously not available on their website during August 2014 and used "Hands Up!" instead of "We Go!". FUNimation obtained the rights to "Hands up!" by the time they released the English dub digitally, and is included there.

This scene is based off of the colored chapter cover spread for chapter 676.