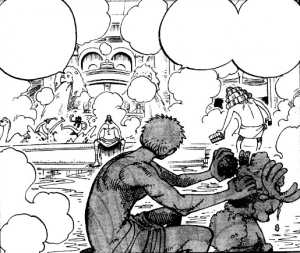 One Piece chapter 213 is the third bathing scene in the One Piece manga series.

This chapter was first released on December 28th, 2001 in Weekly Shonen Jump (2002) #4-5. In July 4th, 2002 the chapter was printed and published by Shueisha in the 23rd manga volume released in Japan. The scene was officially translated and published in the English One Piece volume 23 on October 7th, 2008. 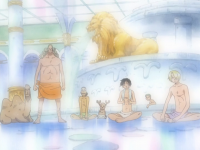 In the manga, some of the male characters are seen sitting crossed legged on the ground completely naked with only a black shade covering their privates while in the anime they were wearing towels in that moment. Nami and Vivi have slightly more bathing screen time in the anime adaptation where the scene ends on both of them in the bathwater listening to the conversation going on in the males side. In the anime, Nami lowers her towel more when she does her "Happiness Punch".