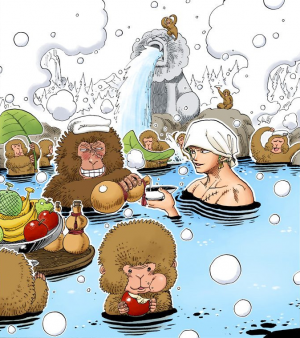 One Piece chapter 174 is the second bathing scene in the One Piece manga series.

The chapter cover shows Roronoa Zoro taking a Outdoor Winter Bath in a Hot Spring with seven Hot Spring Monkeys. Zoro has a Towel on his head and drinking sake that is being poured to him by a monkey that has a Wash Cloth on his head. Nothing bathing related happens in the actual chapters story.