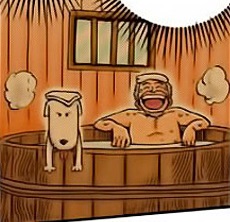 As Chouchou is being beaten up protecting his deceased owner Hocker's pet food store from an attack by the lion Ritchie of the Buggy Pirates, he has several Flashbacks of his memories with Hocker running the pet food store. One of the moments was a panel of both of them taking a Bath together in a Barrel Bathtub with Wash Cloths on their heads with Chouchou leaning over the front edge and Hocker resting both his arms on the back side happily saying that they sold 100 boxes of food today.

This scene was skipped in the anime adaptation. If it did appear it would have been in episode 6.