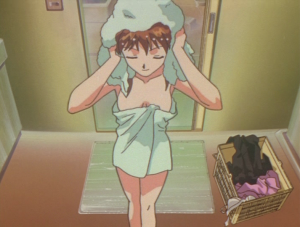 An off screen bathing hint seen in Neon Genesis Evangelion.

Off Screen Bathing is a situation where a character takes a Bath or a Shower but it is not visually shown on screen. It can given through a character stating that they are going bathe or that they have just bathed. Strong hints of off screen bathing are the character walking out of the bathroom wearing a Towel or Bathrobe. Other hints are when a character can be seen running their bath or when a character is Stripping or getting dressed in their Ofuro's Changing Room.

Usually when characters are at an Onsen, you can see some characters wearing spa robes that you didn't see in the actual bathing scene itself. In scenes with a Public Bath or Shower Room, you can sometimes see clothed characters leaving the facility holding their bathing accessories implying that they used before the scene started.

Off screen bathing is usually caused by pacing within' the story as the bathing session they had may not have had any relevance to the plot and didn't need to be shown. There are times when the source material will have a moment implying off screen bathing and a later adaptation will add extra filler scenes showing the bathing.