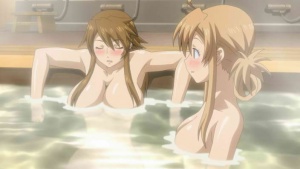 The original TV airing of this scene had a bunch of steam obscuring any Bath Cleavage and buttocks. The scene was released uncensored on all DVD and Blu-ray releases.

Preview for this scene at the end of episode 3

Part of this scene was used in the preview for this episode that was shown at the end of the third episode.